WHY DO GUMS BLEED WHEN YOU BRUSH YOUR TEETH? – ELITE DENTAL CARE TRACY 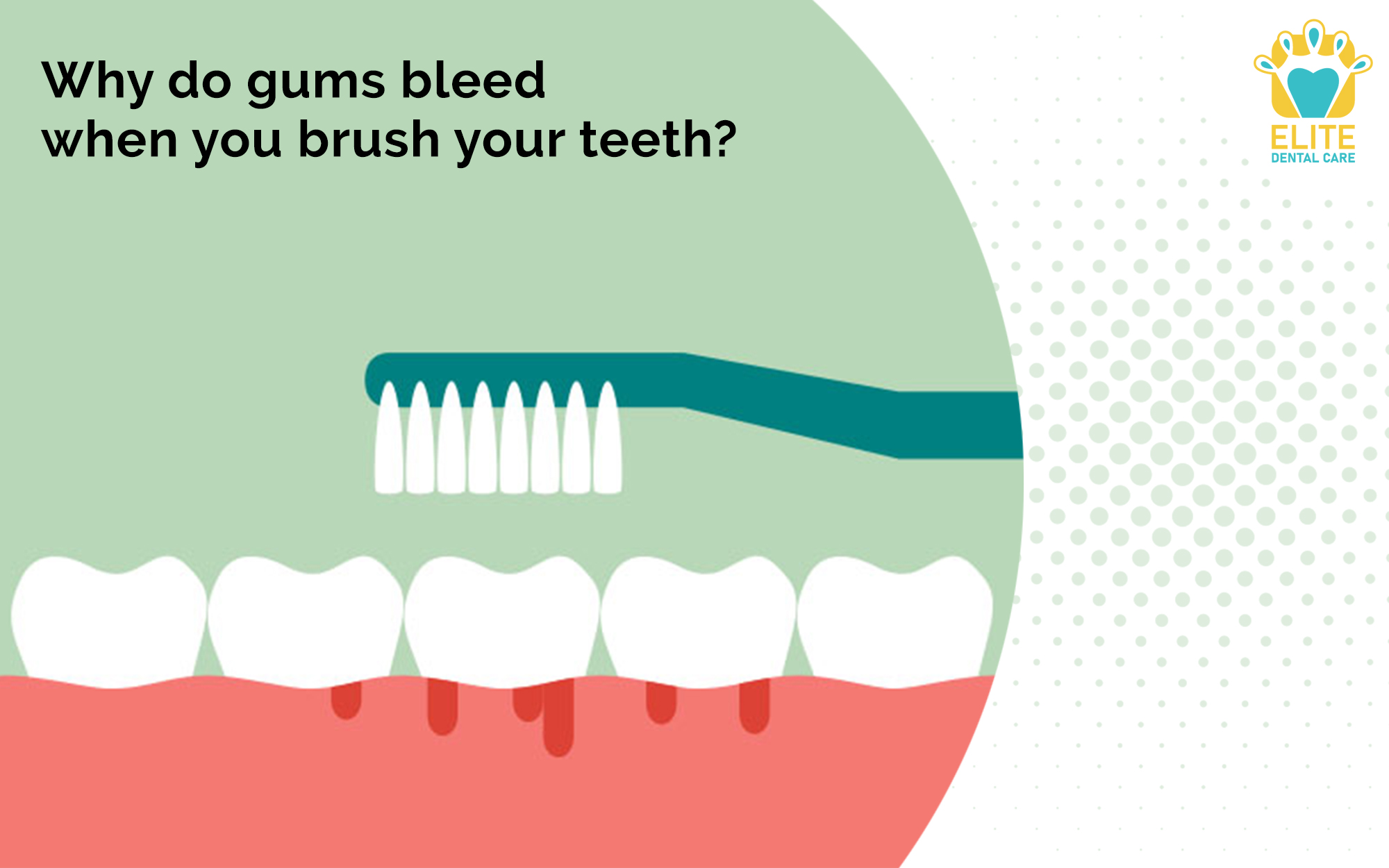 18 Mar WHY DO GUMS BLEED WHEN YOU BRUSH YOUR TEETH? – ELITE DENTAL CARE TRACY

Posted at 00:48h in Uncategorized by edental 0 Comments
0 Likes

Early in the morning, you brush your teeth to remove the plaque formed overnight, and suddenly your gums start bleeding. Has that happened to you? Have you wondered why are your gums bleeding all of a sudden? At times it could be because of harshly striking the brush on the teeth and the gums. But what if your gums bleed regularly? It could be an alarming sign of gum diseases. Gum bleeding is an initial stage of various severe dental disorders. Here are a few reasons for the bleeding of gums.

1. PLAQUE FORMATION
Every night plaque is formed on your teeth owing to the bacteria in the mouth. This plaque is removed when you brush your teeth in the morning. Dental plaque hides in the gaps between the teeth or on the gum line, which can be removed by flossing teeth using dental floss. But when you don’t brush and floss your teeth or consume much of sugary foods leaving the sugary residues stuck in the mouth, plaque builds up. Plaque that is left untreated in the initial stages, settle above and below the gum surface and form a hardened blackish-film called tartar.
Plaque and tartar are nothing but bacterial build-up that damage the gums and the teeth, causing severe dental defects. When the bristles of the brush come in contact with the plaque, the gums bleed.

2. GUM DISEASES
i. GINGIVITIS
Plaque formed above and below the gum surface damage the gums causing gingivitis, a gum disease. Along with bleeding gums, other symptoms of Gingivitis include inflammation of gums, swollen and reddish gums.
Gingivitis can cure by efficient brushing, flossing and rinsing of the mouth with mouthwash. Though it’s a mild gum disease if left unattended can lead to severe Periodontitis gum disease.
ii. PERIODONTITIS
Periodontitis is a serious gum disorder that infects the gums badly. It makes the gums inflamed, damages the tissues and roots that support the teeth. You know that gums are the supporting foundation for the teeth to stand straight. Now, if the gums are badly infected, they loosen their hold, and the teeth pull away, causing gaps, shaking teeth and ultimately falling of teeth. Periodontitis can also lead to bad breath, bad taste and improper bite.

3. VITAMIN C DEFICIENCY
Vitamin C is vital in the maintenance and repair of tissues. It strengthens your bones and teeth and pacifies the healing of wounds. Now, when there is a vitamin C deficiency in your body, your teeth bones and tissues weaken, and the bleeding gums do not heal soon.
Scurvy is another Vitamin C deficiency that leads to bleeding of gums. To supplement vitamin C deficiency, consume Vitamin C-rich foods like citrus fruits, broccoli, strawberry, tomatoes, bell peppers, etc.

4. VITAMIN K DEFICIENCY
When your gums bleed persistently, it could be due to the lack of Vitamin K that helps the blood clot regularly. Consume foods that provide Vitamin K like spinach, lettuce, olive oil, canola oil, watercress, kale, soybeans, etc.

5. DUE TO MISFIT OF DENTURES
When your teeth dentures don’t fit correctly, your gums might start bleeding.

6. DUE TO MISALIGNED BITE
When you suffer from dental malocclusion, your bite gets misaligned, causing crossbite, underbite, overbite, or open bite. When improper pressure gets exerted on certain portions of teeth and gums, the tissues may damage, and the gums bleed. Grinding of teeth can also be a reason for bleeding gums.

7. MEDICAL REACTION
Sometimes you might be consuming certain medications that lead to thinning of your blood. When the blood is thinned, bleeding occurs even if when your brush strokes on your gums a little harder.

8. LEUKEMIA
Leukemia is a type of blood cancer. Usually, the blood platelets help in the clotting of blood. But when the platelet count decreases due to leukemia, it becomes difficult to stop bleeding from various parts of the body, including the gums.
Apart from the above reasons, sometimes your gums may bleed when you don’t brush or floss your teeth properly, exerting more pressure on the gums. Gums are delicate and hence take proper care of them to avoid bleeding. If your gums bleed for long, visit our clinic, The Elite Dental Care and treat your dental problem at the earliest. Prolonged bleeding of the gums can worsen your dental condition and spoil your overall dental health.

If your gums are healthy, your teeth will be healthy. Visit https://www.theelitedental.com for more tips on dental health. You can also visit our clinic, The Elite Dental Care for all dental treatments.